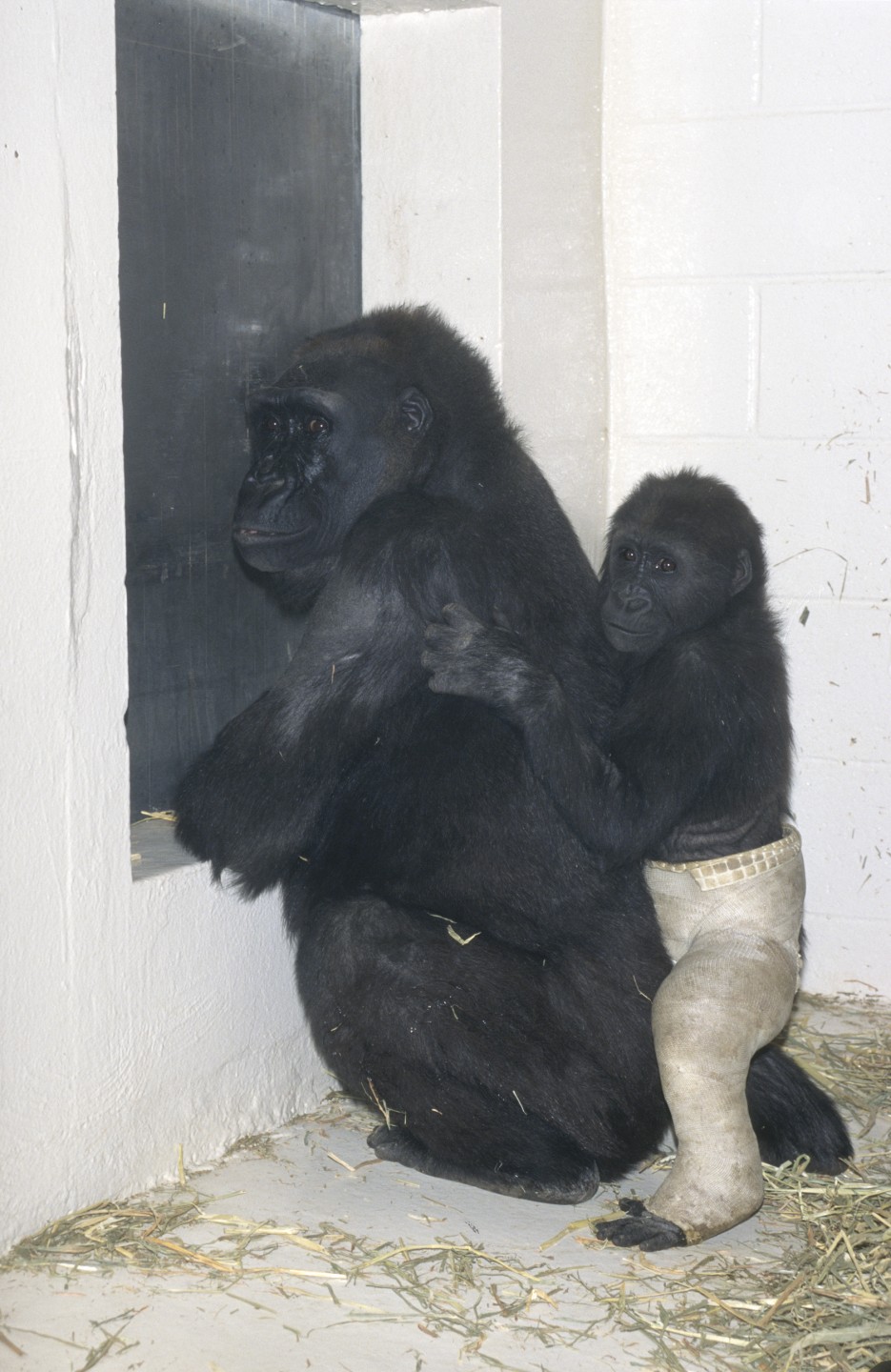 Ndjia, a western lowland gorilla, had been born on December 31, 1994 at the Wild Animal Park, a wonderful New Year’s gift to the gorilla troop and to the Park. Her mother, Kamilah, was attentive and caring, and Ndjia thrived, an active, curious, and sociable youngster. But when she was a little over a year old, keepers and veterinarians saw that something was wrong with her left leg. She wasn’t using it well, and there were signs of atrophy. Dr. Jim Oosterhuis, director of veterinary medicine at the Park, and the veterinary team conducted an hour-long procedure to give Ndjia a full physical and take radiographs of her leg. They discovered that her femur was not growing in the left leg, and there was evidence of a healed fracture just above her knee, where the growth plate was. Apparently she had had a fracture at some point early in her first year that was undetected, because young gorillas are carried by their mother and other troop members much of the time in their first months of life.

The veterinarians had never encountered this problem before, but they knew that if left untreated, Ndjia would not be able to use her leg, and it might even have to be amputated. That was not an acceptable outcome. The team consulted with other veterinarians, and the recommendation was to bring in a pediatric orthopedic surgeon. Dr. Scott Mubarak from San Diego’s Children’s Hospital agreed to help. He, Dr. Scott Wallace, and Dr. Chris Kim as a team had performed dozens of corrective surgeries for this problem in human children. They had never worked on a gorilla, though! Together, the team from Children’s Hospital and the veterinary team from the Wild Animal Park made up the perfect solution to help little Ndjia. Dr. Oosterhuis said, “We felt we should do anything and everything possible to help her leg function and to improve her quality of life. This little gorilla not only deserved a chance to grow up but also to someday have and care for her own babies.”

The 4 1/2-hour surgery took place at the Wild Animal Park on February 1, 1997, a month after Ndjia’s second birthday. All went very well; but the final results would not be known for months. In the meantime, Ndjia would have to wear a hip-to-toe cast for a month. No one knew how that would go—would Ndjia adjust? Would Kamilah accept her daughter back with such a weird thing on her body? Would she try to rip it off of Ndjia? In the end, they just had to take a chance and see what happened, ready to intervene if necessary. To everyone’s great relief, Kamilah readily accepted Ndjia back, and she just ignored the cast. And Ndjia was a trooper—she worked around the cast and was playing and tumbling like any two-year-old gorilla in no time!

The cast was removed on March 1, 1997, but the results wouldn’t be known until the six-month follow-up in September. That morning, the team did a thorough exam and took radiographs of Ndjia’s leg—and got the best news possible. Ndjia’s left leg had filled out, the knee motion was improved, and the leg was growing. The team was thrilled with the result. Although Ndjia’s left leg would always be a bit shorter than her right, resulting in a slight limp, it would not impede her abilities and would be less and less noticeable over time. Dr. Mubarak said that he “looked forward to following her progress and watching her grow up—I certainly will never forget my very special patient.” This New Year’s baby was now a healthy three-year-old with a new lease on life.