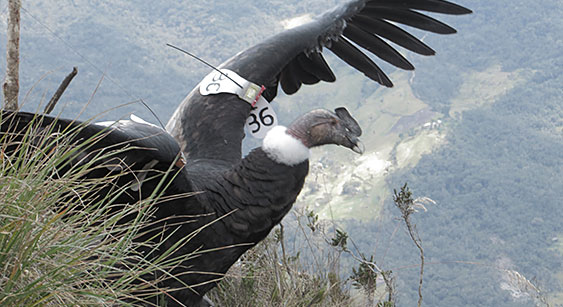 From the start, the California Condor Recovery Program made headlines, perhaps because of the controversy surrounding it, perhaps because it was a local U.S. species, or both. But there was also another condor story to tell, one with similar drama, high stakes, and people determined to make a difference: the return of the Andean condor.

By the 1930s, Andean condors were no longer seen soaring in the skies over the Paramo Chingaza mountains of Colombia. Much like the California condor, capture of the birds, hunting, and poisoning from pesticides and lead had decimated the population. The species had been declared extinct in Venezula in the late 1960s, and only 30 to 60 birds were thought to still exist in Colombia in the 1980s. Fortunately, there were more than 100 Andean condors in zoos, a fact that led to Colombia’s department of natural resources working with condor experts to begin an intensive breeding and reintroduction program in 1988.

Colombian and U.S. biologists worked together to choose and set up release sites and radio tracking equipment, train staff, and relocate the birds. The birds stayed in pre-release pens to acclimate, and excitement built as the local communities and press embraced the project. Then it was time for the birds to fly. Alan Lieberman, Zoo curator of birds, was there that day and said in a ZOONOOZ article, “how can one describe the thrill of witnessing the maiden flight….This is a moment that all who were there will remember for the rest of their lives.” The Andean condor had returned, soaring the skies once more.